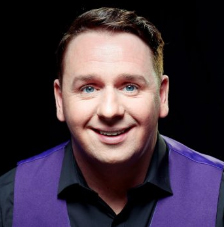 Comic timing is a real skill. Combine it with hilarious overindulgence and a Cornish accent and you’ve got one of the brightest young comedians today… Jack Glanville.

You’ve also got pains in your sides too from laughing. Jack performs his hilarious and energetic show of sharply observed jokes and a few songs thrown in to family audiences around the world. A regular “funny bones”, you’ll find him on international cruise ships and luxury holiday resorts, as well as back home in regular theatre shows and pantomimes.

Jack was spotted early in his career and won a national “Best Male Entertainer” award. Since then, he’s represented Cornwall at the Highgrove home of HRH Prince Charles.

More recently, Jack, who hails from Newquay in Cornwall, has developed his act into a more adult show that can also be booked for an appropriate audience.

Jack is spending his 2017 between a host of UK tour dates, various cruise bookings and becoming a new dad, which will no doubt create a host of new material for this West Country funnyman!

As well as performing at a number of venues this year, Jack will once again be starring in pantomime at Yeovil’s Octagon Theatre in the winter.