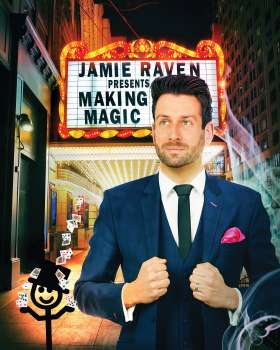 Jamie Raven burst onto an unsuspecting world during the 2015 series of Britain’s Got Talent. His magic amazed audiences and even made Simon Cowell exclaim, “I now finally believe in magic!” on route to finishing, in his own words as “Top Human”.

His online videos from Britain’s Got Talent and other subsequent performances have now been seen over 400 million times, making him one of the most viewed magicians in the world today.

In November and December 2015, Jamie headlined “The Illusionists” at The Shaftesbury Theatre, which went on to break the box office record for a limited engagement and in doing so became the most successful Magic show ever in the history of London’s West End. In June / July 2016, November 2016 and February 2017 he took his own one man show on a tour across 5 countries, playing 58 shows across 49 different venues, and has just completed a successful 2018 UK Tour “Making Magic'”.

He was launched as the online face for Talk Talk, promoting their “Amazing things you can do with £10″ campaign. And asked to perform an incredible illusion in which it was “Raining Money” inside Westfield Stratford, to launch the “Now You See Me 2” Movie.