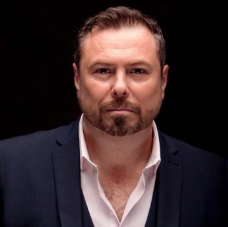 Josh Adams has followed a very familiar career path (Brian Conley and Russ Abbott) by working as a vocalist in bands and quickly became recognised for his voice, charisma and natural comedy personality.

Now taking his solo cabaret to on some of the worlds biggest cruise lines where he performs his show packed with laughs and song.

Leaving the audience amazed by his vocal ability and roaring with laughter with his very own kind of comedy.

Josh is earning himself a great reputation as an all-around entertainer and we are very proud to be representing this huge talent.

Josh is currently working in a variety of performance formats in the UK including Warner, Theatre Shows, as well as a busy touring schedule for the some of the world’s best cruise lines including P&O, Thomson and Fred Olson.