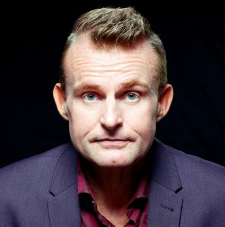 Martyn James is nothing short of magic. A versatile performer, he’s an award-winning comedian as well as a recognised magician and illusionist.

Martyn brings such an original style of show to the stage that he leaves his contemporaries in the shade, but more importantly, his audience truly entertained. His great talent lies in his ability to work a variety of different shows ranging from stand-up comedy to full-scale staged illusions.

Having performed all over the world for nearly 20 years, Martyn has produced material for various shows ranging from television to theatre and, as a highly respected member of the Magic Circle and innovator of many new and quirky tricks, is often called upon as a magic or illusion consultant.

In 2003, he was awarded the British Magical Grand Prix and was voted best speciality act by Venue magazine in 2009.

Martyn has proved he’s one of the country’s best comic entertainers too, performing his unique brand of stand-up comedy to roars of appreciation. He is known for his professionalism and high standards, as well as his willingness to maximise every show’s potential.