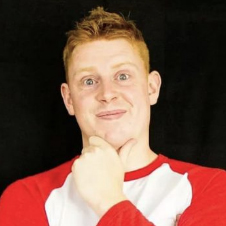 Young talented comedian Phil Reid can be seen performing his show on both sides of the comedy fence! he regularly performs at comedy clubs up and down the country and all over the world.

As well as his Comedy Club work, he also performs for the cruise and variety markets for a variety of leading and well-known brands ranging from luxury Cruise lines to Holiday centres and Theatres.

Phil can be seen appearing this year in the Qdos Pantomime Cinderella at the famous Churchill Theatre, Bromley in the lead comedy role of Buttons.

Phil has toured and supported a number of well-known celebrities ranging from Jason Manford, John Bishop, Tim Vine, and Lee Nelson in a career that has seen him perform in some of the biggest comedy venues in the country – The Hammersmith Apollo and the London O2 arena.

So what do people say about Phil’s Act?

“Phil is proper QUALITTTEEEEE and a massive legend” – Lee Nelson